Lets take a look at what is in meat from the good to the bad.  Meat can have many things in it depending on what kind of meat and how it is raised and processed.  I am going to give a quick highlight here without going into the deep depths of the research and if you want to see the details of the research I will show you were you can find that.  I am going to focus on the three main meat sources here like beef, chicken, and pork.

Can you tell what is in meat by looking at it?

Not all meat is created equal.

The first thing to understand is that there is a huge difference in what is in meat based on how it was grown.  In fact if you take conventionally grown meat compared to natural grass fed/pastured animals they are entirely two different things.  I also want to state that just because a label on meat says “organic” doesn’t meat it is the same as grass fed or pastured meat and in many times it has some of the same issues as the conventionally raised meat.  Since there is such a huge difference in meats by the way they are raised I am going to discuss what is in meat based on how they are grown and not so much by the species of the animal it comes from.

What is in commercially raised meat?

This is such a hard topic to discuss since there are so many negatives in conventionally grown meat and it would be great if someday things will change and I can erase this part and one day pastured based meat will become the conventional norm.  You never know things are changing rapidly!

Fat Factory farm meat is going to contain more of the fats that develop in the muscle (marbling) rather than the fat that develops around the muscle.  I prefer to have meat with the fat on the outside that can be either trimmed off or left on for flavoring.

Antibiotics  This is most relevant to chickens since the industrialized chicken houses are so crowded and unsanitary that the growers have to feed antibiotics to keep the birds alive.  About 70 to 80 percent of antibiotics produced go into livestock feed and now we are seeing an increase in antibiotic resistant diseases.

Hormones  Pharmaceutical company’s say there is no harm from giving animals growth boosting hormones however there is an increasing amount of research showing that the hormones remain in the meat and are causing health problems in consumers.

Chemicals  the pesticides and herbicides used to grow the feed for the animals are found in the final meat product and it is causing a lot of health problems in people.  The biggest culprit is glyphosate that is commonly used in a herbicide called Roundup.  However the government is approving more toxic chemicals on a regular basis since plants have been found to develop immunity from previously used chemicals.

chlorine  When meat is commercially processed it goes through a chlorine bath to sanitize it because of the poor handling methods and because the  meat carries a foul ammonia odor from the poor living conditions it endured during it’s life.

Dyes  Meat is often treated with dyes to enhance the color to make it more appealing in the package.  You may have also heard in the news recently how commercial processors use a red glue like substance to give the meat shape and color.  Bright red beef meat doesn’t mean quality.  Meat doesn’t turn bright red until it is exposed to light and air.  This is called blooming and stores use this to make their meat look more pleasing to the eye.

GMO  Genetically modified organisms are foods that have had there genetic code manipulated to do something it wasn’t designed to do.  This is a huge subject and I wont go into the details here but I encourage you to learn as much as you can about what a GMO is and what problems it is causing.  Many think that GMO’s only affect grain and fruit products but it has a huge impact on meat since most grocery store meats are raised on GMO grain and the effects of this show up in the meat.

This is not a complete list of ingredients in factory farmed meat by any means but it covers some of the biggest dangers and I may add more latter if I see a need too.

With so many drawbacks to conventional grocery store meat fare I am glad there is an alternative.  This is the part I enjoy writing and talking about so lets take a look at what is in natural grass fed animals raised on quality food they were meant to eat.  This next section describes the meat of animals that are raised on high quality feeds such as managed pastures where the animals are moved routinely to fresh new grass such as with beef.  Pork and chicken are grown on managed pasture as well and also supplemented with quality nonGMO grains. 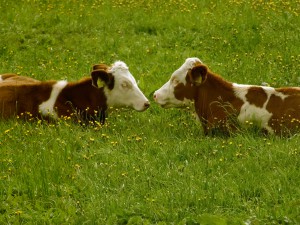 Quality in the making.

Nutrition  Grass fed or pastured animals have many times more nutritional value such as  conjugated linoleic acid (CLA), vitamin E, beta-carotene, and omega-3 fats.  They are also rich in calcium, magnesium, and potassium.  This list could go on but I think you get the idea.

Fat  Yes, naturally raised meat still has fat in it but not as much and it is a much healthier fat that is more digestable.  The fat is more outside the muscle rather than in it so the meat is leaner and has a better texture.

Sunshine  How do you get sunshine in meat?  It comes by way of the grass and the exposure.  Animals that get regular amounts of sun and eat fresh green grass gain many health enhancing benefits and don’t have the issues with diseases and parasites because the sun is a natural detox and antiseptic.  It is lush green grass that converts the suns energy into food for the cows and I am not a big fan of eating grass but I do enjoy eating meat that gets its nutrients from the grass.

Taste  You can taste nutrition and quality.  If something does not taste good there probably is a reason and it is our God given sense of taste that should warn us of inferior food.

If you want to get into more details about what is in meat either conventional or natural you can checkout places like Dr. Mercola and Weston A. Price Foundation.  If you are looking for naturally raised meat you can see more about how to find it at our store.

Glad to see so many people thinking about what goes into their food and I enjoy discussing this topic so leave any questions or comments below.

Thanks and God bless!